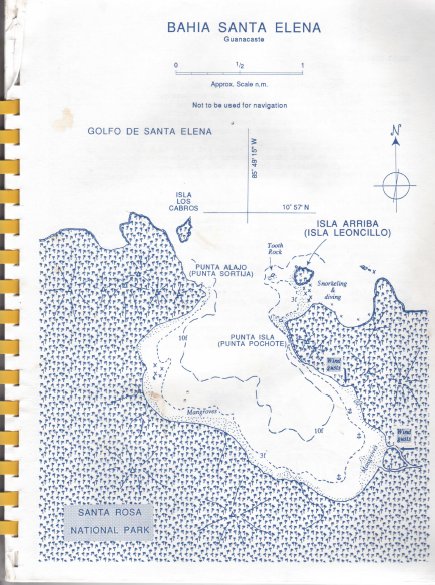 Rene and I hate crowds, especially when it comes to fishing. In Alaska we would take a map and go off exploring.  We had a jet boat, an inflatable with 15hp motor, a canoe, and a couple of sea kayaks, so exploring by water was always exciting.  Hiking remote trails to access crowdless rivers or lakes produced fantastic fishing and unbelievable scenery.  Our freezer was always packed, and we enjoyed fish all year long.

Now, here we are in Costa Rica.  We both still have the fishing passion, but now Rene is busy selling real estate and I have been working hard helping her and taking care of our place.  However, the past year or so I've been getting the bug to go exploring again.  There are places in this small country that are off the beaten path, and like Alaska have fantastic fishing with scenery to match. But without the Alaskan cold.  So, I contacted some adventuresome friends and the fishing adrenalin started to percolate. 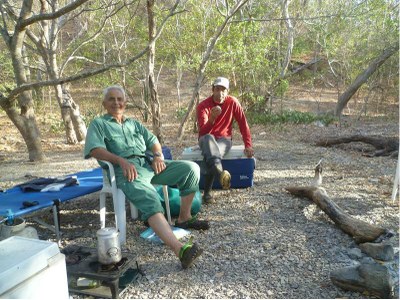 Eduardo and Jim at camp

Our destination was Bahia Santa Elena in the Pacific, very close to the Nicaraguan border.  This part of the country is hot and dry, but the beaches, bays and little islands are beautiful and practically deserted.  First, look at a map and find the National Park Santa Rosa, with its steep, mountainous terrain that juts into the Pacific. Then look on the north side of these mountains, you will see Bahia Santa Elena.  At the mouth of the bay, if you turn and look directly north you can see the mountains of Nicaragua.  As a matter of fact, directly above the bay, on the mountain top overlooking the Pacific, Daniel Ortega (yes, the guy of Iran-Contra fame) had his secret get-a-way spot.  And yes, Ollie North visited there as they negotiated their drugs-for-arms deals.  Since they weren't there to fish I doubt if they made it down to the bay... and that was our destination. 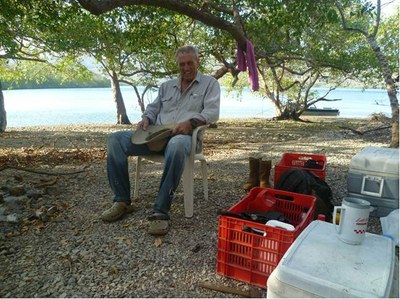 We launched the boat from the beach located in the little fishing village of Junquial (just north of Santa Rosa National Park on Hwy.1).  The locals also launch from the same spot, so it is not hard to find.  Make sure you have the tide charts and high-tide times; otherwise you won't make it over the sand bars.  Then, head west (mountains on your left) for 15 to 20 minutes, depending on your boat speed, until you see the opening to the bay.  You should have a fairly detailed map, as I do, and we also have a sailing chart book which shows depth, bottom conditions, dangers, etc.  (See chart at the end of this post). 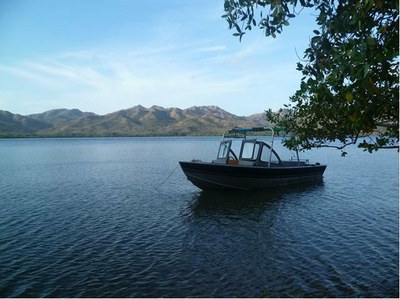 My boat: “What’s Next?” on beautiful Santa Elena Bay

Just inside the bay, on the left near the rocks, anchor just offshore. There you can bait fish for Red Snapper.  The locals use cut up mullet that you can buy in Junquial.  It's not uncommon to catch more than you can use in just a short time, so don't overfish.  Further in the bay, about 2/3 in on the left, you will see an opening in the trees.  This is a beautiful, wilderness camp spot that only the local fishermen use.  Watch where you pitch your tent (if using one), because at high tide...the small holes in the ground will bubble water.  Our first night we were awakened by a BIG cat coming through camp checking things out.  Probably a Jaguar...similar to the US western states mountain lion...only larger.  Good thing our food was packed in coolers and closed.

At low tide from 50 to 100 yards out, you can cast toward shore with a surface lure (floating popper, etc.), reel fast, then stop...if no strike, pop the lure a couple of times, then reel fast some more.  You will get a fish...maybe a rooster fish, mackerel or a bigger surprise.

If you are still on the shore at low tide and are waiting for it to rise, you can cast out toward the bay with a sinking lure...shiny is best, then reel in fast.  The fish you catch this way are smaller, but we caught one with almost every cast.  Mostly mackerel about 18 inches...perfect for the grill.

Outside the bay, troll parallel to the mountains on your left.  However, be prepared - in the deeper water you could catch some VERY BIG FISH.

I could go on and on about this trip, but I'll stop.  I'll post more of my secret spots later on. 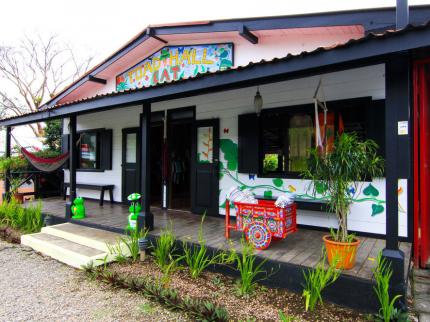